Hi-Soo walks Emma. They see some thugs bully Yu-Yeon. Hi-Soo takes Yu-Yeon away from the thugs. She calls the police. Emma tells Hi-Soo that Yu-Yeon needs to repay the debts her dad owed when the police questions Yu-Yeon. 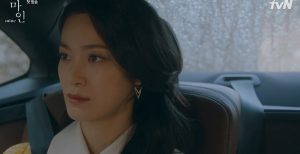 Ja-Kyeong walks in the rain when she holds a red umbrella. Someone picks her up and drives to the castle. Hi-Soo goes downstairs and sees Yu-Yeon. Yu-Yeon bows to Hi-Soo when she smiles at her. Seo-Hyun reviews Ja-Kyeong’s resume.

Hi-Soo reviews Yu-Yeon’s resume at the same time. Yu-Yeon tells Hi-Soo that she’s good at taking care of kids. She reveals she raised her siblings. Hi-Soo thinks Yu-Yeon can take care of Ha-Joon well. So she calls Seo-Hyun. Seo-Hyun tells Ja-Kyeong to be her secretary.

Ja-Kyeong catches the red umbrella. She explains that she forgot it because the rain stopped. Seo-Hyun sees that the umbrella is a limited edition. Ja-Kyeong smiles to tell Seo-Hyun that it’s a knockoff. Seo-Hyun sees the bag Ja-Kyeong holds. She thinks it’s very expensive. Ja-Kyeong bows to Seo-Hyun. She leaves.

Hi-Soo is doing flower arrangement. But her hand is hurt. Ja-Kyeong shows up and bows to Hi-Soo. Hi-Soo learns that the woman is the new teacher, and welcomes her. Ji-Yong shows up and gives Hi-Soo a kiss. She introduces Ja-Kyeong to him.

Ja-Kyeong promises to take care of Ha-Joon well. But Ji-Yong walks away. Hi-Soo explains that her husband is very shy. She cooks the food for Ja-Kyeong. She tells her that her son likes the food. Ja-Kyeong tastes the food, and tells Hi-Soo that it’s delicious.

Hi-Soo smiles. She grabs Ja-Kyeong’s hand, and asks her for looking after her son. She reveals there’s a family dinner and Ha-Joon cannot attend it. Ha-Joon shows up and hugs Hi-Soo. She takes him to the second floor. Soon-Hye sings the song. But the song is hard to her. So she asks the follower to change the song.

The van arrives at the castle. The workers carry the ingredients out of the van. They carry them to the kitchen. The chefs begin to cook those ingredients. Seong-Tae brings the suit to Suk-Chul when the doctor checks Suk-Chul’s blood pressure.

Seo-Hyun arrives at the banquet. She finds out that Jin-Ho switched the seats. Ja-Kyeong walks by when the families are eating. She walks in the living room and sees the foods on the table. She picks up one of the meat, and eats it up.

Yu-Yeon bows to Ja-Kyeong because she mistakes her as the madam. Ja-Kyeong laughs to deny it. But she likes her new title. The maid shows up and scolds Ja-Kyeong for eating the meat. Ja-Kyeong thinks it’s food so that she can eat it. She walks away.

There’re so many Korean dramas which come out in 2020. Record of Youth is the one which is worth of watching.

Hye-Jun is a handsome guy, and he becomes a successful model. He has a dream to become a top actor. But he lacks the chance and his family is poor. He doesn’t know there’s a makeup artist Jeong-Ha likes him very much. He sees his photo in her phone so that he asks her if she is his fan. She denies and tells him that she likes her best friend Hae-Hyo.

Hae-Hyo is a top actor because he comes from a rich family, and his mom I-Yeong always supports him. So he gets many chances. But Hye-Jun’s dad Yeong-Nam doesn’t like him to be a actor. He always throws a fit when he mentions his dream. He wants her to be a worker like him.

Hye-Jun’s mom Ae-Suk supports his dream. But she is poor and needs to work for I-Yeong. I-Yeong keeps mentioning Hye-Jun to hurt Ae-Suk, and gives the old clothes which she wants to throw it away to her. She pretends to be nice to her. Ae-Suk knows everything. She bears it for her son.

He wants to be a top actor, but his path is very hard. He falls for Jeong-Ha after knowing she is a fan of him.

She is a makeup artist. She is good at makeup so that her colleague Jin-Ju hates her and gives her hard time. She likes Sa Hye-Jun and wants to do everything for him.

He is a top actor because he comes from a rich family. He feels guilty for his best friend Sa Hye-Jun. Because he always take away the job for him, even if he doesn’t intend to do that. He is nervous when An Jeong-Ha is close to Sa Hye-Jun for some reason.

He is a photographer. He is also Sa Hye-Jun and Won Hae-Hyo’s friend.

She is Sa Hye-Jun’s mom. She is a maid who works for I-Yeong.

She is a housewife. Her job is to make his son to become successful.

He is Won Hae-Hyo’s father who is very rich president.

She is the boss of Sa Hye-Jun. The two worked for Lee Tae-Su. She cannot it while seeing Lee Tae-Su bullying Sa Hye-Jun. So she founded a company to help Sa Hye-Jun.

Dong-Seok asks if the whole team was wiped out. Kook-Hwan admits it, and thinks they were killed because of lack backup. He says that the casualties were few as it was a top-secret mission, and they told the press that a wheelhouse fire was the cause.

Gwan-Soo introduces himself as the team leader, and he is going to take over the task. He tells the people that Michael is level 1 on their watch list. Dong-Seok asks what company team 3 looked into. Gwan-Soo tells Dong-Seok that it’s Kwang Hitech, and thinks they can try to smoke a tiger out of it’s den.

Dong-Seok points out that anyone who contacts Michael has been dead even if they’re their best agents. He asks who would risk their lives to do that. Kook-Hwan says that he thinks he knows some people. Dong-Seok yells at Kook-Hwan and asks him what he means.

Kook-Hwan says that there’re a few agents who will stay with the NIS, whatever mission they’re given. Dong-Seok asks who they’re.

Mi-Soon carries a box and gets into the elevator. The women talk about the fire. Mi-Soon tells the women that sharing information is key, especially when it’s bad news. She tells them not to hide the truth by keeping quiet. She adds that the woman had no fire insurance and had a hard time. She says that she felt so sorry for the woman.

The mom asks Mi-Soon how much it’s for fire insurance. Mi-Soon gives her business cards to the ladies, and tells them that the fire insurance only costs them one cup of coffee a month. The kid finds a real gun from Mi-Soon’s back, but his mom ignores it. Mi-Soon catches the chance to run away.

Kook-Hwan introduces the next agent Ye-Eun. But Gwan-Soo tells Dong-Seok that Ye-Eun is a white agent. Dong-Seok learns that Ye-Eun has no field experience at all. Kook-Hwan admits it but he says that Ye-Eun supported field agents for years.

Kook-Hwan says that Ye-Eun is an IT specialist, and thinks she is an ideal person. Dong-Seok points out that they barely succeeded with their best men, and he doesn’t believe those women can manage it. Kook-Hwan tells Dong-Seok that it’s their best option. But Dong-Seok asks Kook-Hwan to call Chan-Mi. He thinks they should put their best and craziest agent up against Michael.

Chan-Mi tells God that she won’t kill any life. The police gets Chan-Mi to clean up the window. The two women talk about Chan-Mi and call her royal psycho. Chan-Mi sees the bullies bullying a woman, and tells them that she worked hard to clean the place.

The bully asks Chan-Mi if she wants them to wash her face as well. She tells her to shut her mouth and get lost. Chan-Mi smiles and says that what she means is that they should keep the place clean. So those bullies continue to bully the woman. Chan-Mi beats them and gets them to clean the place.

The police locks Chan-Mi up and asks her if she’s crying. Chan-Mi laughs and asks for a spoon of red pepper paste as it tastes amazing.

Kook-Hwan reminds Gwan-Soo that his monthly pay got distrained because he couldn’t afford to pay his alimony. He thinks he needs a job to make a living.

Mi-Soon and Ye-Eun are summoned to the office. Mi-Soon doesn’t want to do it as she thinks she might die if she does fieldwork at her age. She says that she doesn’t take stairs because she has arthritis. She wants to leave. But Gwan-Soo stops her and points out that she’d never let arthritis get in the way of her career.

Gwan-Soo reminds Mi-Soon that it’s been a while since they worked together. He calls her dear colleague. But she says that she doesn’t care about colleagues as it’s been way too long. She asks him if he wants her to do fieldwork with Ye-Eun.

Ye-Eun reveals she has never worked as a field agent before. Mi-Soon asks Gwan-Soo what she’s supposed to work with Ye-Eun since she is a complete rookie. Ye-Eun talks back that she has a kid even if she looks young. Mi-Soon walks to Ye-Eun and asks her if she needs a early childhood insurance. She hints her that kids get hurt easily.

Ye-Eun ignores Mi-Soon and tells Gwan-Soo to tell people that she’s not capable of doing the task. But he gives the two the papers that Mi-Soon needs to repay her loan and Ye-Eun has to move out of the house. Mi-Soon asks Gwan-Soo if he’s blackmailing her. But he tells her that he’s there to convince her.

Kook-Hwan visits Chan-Mi. She thinks he’s aged. He points out that they lost Michael because of her, and he barely clawed his way back from certain death. She admits that it was her only mistake, and asks for a chance to make up for it.

Kook-Hwan points out that it’s why Chan-Mi came to prison. He asks her when she joined forces with the deputy head. She asks him if he is upset that she made a deal with Dong-Seok behind his back. He threatens not to let her off if she ruins his plan again.